Current advertising for beauty products makes abundant use of scientese, scientific jargon in statistical and/or verbal form. As of yet, no study has examined the impact of scientese in an advertising context. Therefore, an experiment investigates the credibility and liking of ads for different beauty products with and without scientese. The study assesses effects in a culture likely to be susceptible to scientese because of its large power distance and high uncertainty avoidance (Wallonia), and in a culture less likely to be susceptible to scientese (the Netherlands). Dutch (n = 72) and Walloon (n = 60) judged different ads for beauty products with or without different forms of scientese. In both cultures, ads with scientese were found to be more credible but less liked than ads without scientese.

Research on persuasive evidence types has been limited to Western cultures. Because Western systems of thought are claimed to be fundamentally different from Eastern systems of thought, the persuasiveness of evidence types was explored in one Eastern culture. Indians (N = 183) judged claims supported by different evidence types.  Statistical, expert, and causal evidence were found to be equally persuasive as support for claims.  Indians also appeared sensitive to evidence quality that was manipulated according to Western norms for reasonable argumentation: normatively strong evidence was more persuasive than normatively weak evidence.  Findings are compared to results from studies conducted in Western cultures. 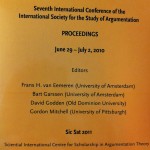 Empirical research has demonstrated that variation in standpoint explicitness matters. In several research reports, explicit articulations of a standpoint or conclusion have been compared to more implicit articulations. Meta-analyses of such reports (Cruz, 1998; O’Keefe, 1997, 2002) have shown that messages with explicitly stated standpoints are more persuasive than messages without such standpoints. Such effects were not found for advertising messages, for which the conclusion – buy this product – seems relatively straightforward, regardless of the articulation of the conclusion (Cruz, 1998). There are different ways in which explicit conclusions may be articulated, one of which is the use of probability markers. Advertising research has compared hedges (which mark a standpoint as moderately probable) and pledges (which mark a standpoint as very probable). In this study, it was investigated whether the reputation of the brand affects the persuasiveness of hedges and pledges. Based on a study conducted by Goldberg and Hartwick (1990), it was expected that hedges would be more persuasive for low-reputation brands, whereas pledges would be more persuasive for high-reputation brands. This expectation was put to a test in an experiment.

Teachers and researchers are considered epistemic authorities that provide reliable information if that information is relevant to their discipline. Students differentiate between relevant and irrelevant disciplines when assessing teachers’ expertise. In this paper, it is investigated whether students’ cultural-educational background plays a role in this differentiation between relevant and irrelevant disciplines. In large power distance cultures such as France, students learn to respect and obey their teacher, whereas in smaller power distance cultures such as the Netherlands, the relationships between students and teachers are more informal. Therefore, French students may be less sensitive to the actual discipline when assessing a source’s expertise. In an experiment, it was empirically tested whether French students perceived smaller differences than Dutch students between fictitious professors and researchers who put forward information that is or is not related to their own discipline. Results showed that the French participants indeed differentiated to a much lesser degree between professors and researchers with a relevant and an irrelevant discipline than the Dutch participants. Further analyses indicated that students’ obedience partially mediated this effect of nationality on the difference between relevant and irrelevant disciplines. This study underlines the role that cultural-educational background can play in the assessments of epistemic authorities.